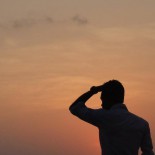 PART I- The deadly route to Malaysia

In the wake of the Asian boatpeople crisis, the Dhaka Tribune’s Abid Azad travels down the migration routes along Bangladesh’s jagged coast in search of answers. On the quayside alongside migrant smuggling boats he finds desperation and ambition in equal measure, and finds menacing eddies that portend far more trouble for the migrants than they bargained for. Beyond the horizon, in foreign waters, a vast network of human traffickers lies in wait. For Bangladeshis looking for a back door to a better life, a vast tide of greed and cruelty threatens to sweep away naïve hopes and whole communities with it.

A certain Ruhul Amin, who came from Myanmar to Teknaf in the late 1980s, was the one who first discovered the route to bring people from Bangladesh to Malaysia through the Bay of Bengal by boat, say local inhabitants.

In 1995, the first voyage was made by a boat from the No 1 sluice gate under Jaliyapara of Teknaf.

The place was very close to my house and I heard the news from my family when I returned from Saudi Arabia, recalls Mozammal Hoque, a long-time local resident.

Initially, it was only Rohingyas who ventured to Malaysia by sea, but as the route became more popular, locals from Teknaf also started to go, and by 2011 people from all over the country started coming to Teknaf to make the journey to Malaysia.

It did not take long for the brokers to realize that they were sitting on a gold-mine, and that taking undocumented workers to Malaysia could be a good business, as it was cheap and it did not require any passport or visa.

The brokers only thought of making as much profit as possible. They did not even care when the sea was dangerous.They used to send people in Malaysia during the rainy season regardless of safety.

Often the wooden boats were broken due to heavy storm and due to collision with rocks which killed hundreds of people over the years, according to locals.

It became a usual scenario in the country that each rainy season one or more such incidents would occur.

The pioneering brokers became legends in the locality, and locals still recall their names: Baitta Saleh and his sons, Kamal and Hossain, Tojor Mulluk, a Myanmar fisherman.  Hefja Majhi, a Rohingya, is another.

A local union parishad member recalls: “Hefja first used to go fishing in the sea, sometimes in more deep sea area. He then used a compass to identify his location. Around 7-8 years ago, when he also came to learn the route, he went to Malaysia in a fishing boat with 5-6 people with him. At that time, there was no such restriction in any of these countries like now.”

The brokers also started influencing Bangladeshi people to go to Malaysia and they got a good response as they targeted the poor who were keen to trade their suffering life for a better one.

Gradually, the brokers’ network grew, and turned into a syndicate.

They also started to manage a large ship from Chittagong port so they could transport many more people, paying the ship’s captain handsomely for his services, elderly boatmen in the Cox’s Bazar and Teknaf area recall. 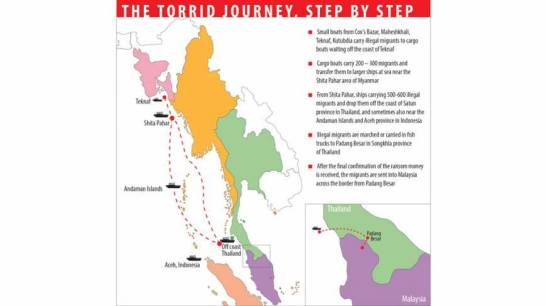 The tempting of Teknaf

The locals heard of voyagers to Malaysia who were sending good money back to their families and had prospered, building houses and setting up businesses. The tales were a temptation.

Most of the people in Teknaf earlier earned from fishing or betel leaf, palm, and salt cultivation.

The Teknaf upazila agriculture officer Abdul Latif said: “Often the agriculture business is not good enough due to political unrest in the country, while irrigation is the remaining main problem for cultivation here.”

“Day by day the agricultural land has been decreasing rapidly due to lack of sufficient irrigation system while due to climate change and high temperature most of the lands are affected by severe salinity,” he told the Dhaka Tribune.

During rainy season and hilly water flow, Aman rice has been cultivated in 11,000 hectares while it goes down to only 1,200 hectares during Boro season because of irrigation crisis, he added.

As the agriculture business has become less profitable, people lose their hope for a better business from it, thus drugs, manpower export, and human trafficking has become the big business in the area, according to many locals and government officials.

In this way, the number of Malaysia migrant seekers had been increasing while at the same time the demand of people has also increased the number of brokers in this area.

At the same time, most of the families in these localities have their one or more members who are living in Malaysia now, while some have even gone on to Australia after reaching Malaysia.

This lucrative business has now spread all over the country, especially in North Bengal, due to economic hardship, so brokers have outposts far and wide to lure unsuspecting migrants.

According to an intelligence report, people from 30 districts in the country are coming here in order to go to Malaysia.

The brokers first collect the Malaysia-bound people and then they bring them by a small fishing boat to a nearby ship, which is kept waiting at a safe area in the Bay of Bengal off the coast of Shittwe area of Myanmar, known among the traffickers and migrants as Shita Pahar.

Elderly boatmen and fishermen in Teknaf area, told the Dhaka Tribune that ships are mostly anchored near Shita Pahar and the traffickers usually do not bring the ship inside the Bangladesh territory as the Bangladesh Navy and Coast Guard always remain alert here.

Many Malaysia-bound people also told the Dhaka Tribune that it require only 15 minutes to reach a big cargo boat, which can carry 200-300 people, by a small fishing boat, that carries 10-15 persons, from Katabunia and Kochubunia under Teknaf upazila as these places are situated near the sea. It is also a safe point to start without any hassle.

The people in the cargo boat are later brought to ships near Shita Pahar, which can carry 500-600 people.

However, sometimes ships are also anchored inside the Bangladesh sea area at a suitable and safe time.

When the ship gets 500 people, it starts its journey to reach Thai waters which are near the Thailand- Malaysia border through Myanmar sea area, which is quite safe.

Thailand is the drop-off point where another party of brokers and godfathers demand their payment and ransom. When they get their payment or ransom in Bangladesh, they send the migrants on to Malaysia.